More than 110 companies are vying to become the first legal marijuana retailer in the city of Fresno.

However, managing the process and regulations can be “very complicated”, said one applicant.

“It makes it more expensive and harder to operate than just wanting to be open to another type of retail business,” said Lauren Fontein, founder of The Artist Tree. The company operates cannabis stores and delivery services in Los Angeles and is looking to expand.

The application deadline for operating cannabis businesses has expired. The city will now go through a month-long process through its Office of Cannabis Oversight to allow up to 14 applicants the right to open a business, which California voters approved in 2016.

The Artist Tree filed two applications in Fresno – one for a location in the Tower District in the former Full Circle Olympic Bar on Van Ness Avenue and another in the former Mariner’s Furniture Store on Palm and Nees Avenue. The group signed rental contracts that were conditional on obtaining licenses.

The retailer operates three cannabis stores in Los Angeles with several more pending in other California cities. Their business model involves offering art for sale in the store, with the proceeds going to the artist.

Fontein praised the way Fresno handled its licensing process, particularly the commitment to recruit 30% of employees from groups identified as disadvantaged.

“This is really a great opportunity for us to align our business practices with the city,” said Fontein. “We try to introduce people from these groups to our employment opportunities and address them specifically when we promote vacancies.”

The Artist Tree plans to seek help from the Fresno Economic Opportunities Commission in finding employees.

Based on the criteria approved this year, two retail locations may open in each of the city’s seven wards in specific zones.

Of these 14 available licenses, between 2 and 4 are reserved.

“The purpose of the Social Justice Program is to examine the historical impact of federal and state drug control policies on low-income communities,” according to the city’s cannabis regulatory bureau website.

Criteria for social justice include income, previous conviction of a cannabis crime, and living in a polluting area (according to government data).

The city received 83 standard marijuana retail applications and 30 more in the social justice category. Only location details were provided for standard applications.

Downtown Fresno appears to be an area potential businesses are targeting. District 3, which includes downtown and part of the Tower District, received 25 applications – most from all districts.

Fresno’s two northern counties – 2 (northwest) and 6 (northeast) – have the fewest applicants at 7 and 5, respectively. These neighborhoods are home to River Park, El Paseo Market Square, and other major shopping malls.

The cost to apply is at least $ 7,920 with many additional fees. There is no fee for share applications.

Conditional Use Permit, also required to open a store, costs $ 13,391.

Fontein estimates the profit margin of their current businesses at 30%.

Courtney Caron, who serves as attorney and spokesperson for The Artist Tree, says federal law is not kind to cannabis companies.

“Until cannabis is decriminalized at the federal level, the 280e tax laws make it very difficult to operate like a normal retail store. There are so many things that you can’t write off because of 280e that a normal company could write them off, ”Caron said.

Caron hopes that something can change under the Biden government.

Applicants are no longer allowed to turn to city council members to lobby.

Caron, a graduate of Fresno State and San Joaquin College of Law, says she reached out to groups like the Tower District Marketing Committee, Fresno Arts Council, schools, and the police force.

Despite the regulatory difficulties and the number of applicants for 14 potential locations, The Artist Tree says their group prefers collaboration rather than competition.

“People who work in the industry are generally very collaborative. They come together, we work together and try to help the other companies, ”said Fontein. “It’s not a cutthroat industry.”

Fontein hopes to create a retail association to improve the cannabis industry.

However, Caron wouldn’t be surprised if a company that doesn’t get a license goes into litigation. She hopes there are no loopholes in Fresno’s policy.

“Fresno did something very different from many cities. You took your time, ‘said Caron. “I can only hope that those who are not licensed may not find this loophole in the regulation or are just willing to move on to the next steps.” 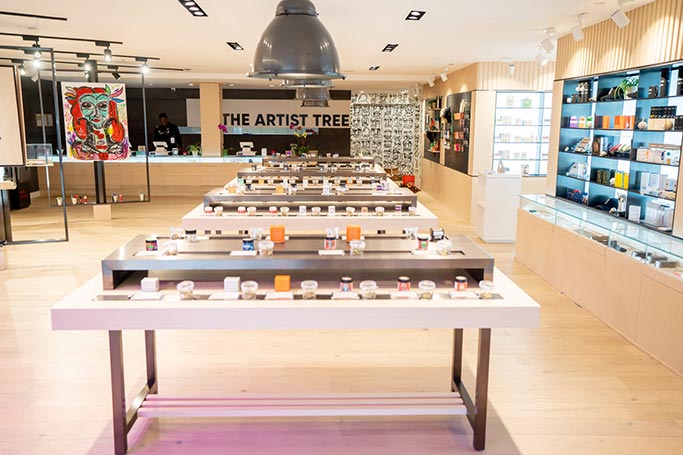 The interior of The Artist Tree’s West Hollywood cannabis store. The company is one of hundreds of applicants looking to open retail marijuana product stores in Fresno. (via the artist tree)

Taxes and the black market

The state levies a 15% excise tax on cannabis retailers. This is on top of regular state and local sales taxes – combined 7.98% in the city of Fresno – and an additional 4% cannabis tax that the city will impose.

“Taxes are another thing that is an unfortunate aspect of this industry,” said Fontein. “It makes it harder for customers because they pay a lot more for the product.”

Even with nearly 27% tax, Fontein says it is still worth buying from a retailer rather than the black market. Retail stores offer quality and security in terms of product and variety.

She also says that the artist tree provides an “experience”.

“We make shopping really fun and interactive and we have pieces of art on display that are always changing. We have this very open layout that feels like an art gallery, ”said Fontein.

In 2018, Fresno voters approved the imposition of the tax on cannabis companies.

Of the city’s expected annual revenue of $ 10 million from cannabis, 10% would go to a charitable fund. The city council and mayor have the power to appoint a nine-member board to set spending targets for the fund, although they have not yet done so.

Caron says they support such action even if it hurts the bottom line.

“They think this is important in the community even if other retailers don’t meet this requirement. Cannabis companies do this, although it often pushes them back, ”Caron said.

The city has other categories for commercial cannabis businesses – including cultivation, manufacture, distribution, and testing.

These stores are permitted in locations other than retail stores, primarily along portions of Highway 99 or Highway 180 corridors. The city received 17 social justice requests and 10 standard requests.

Fresno issues a total of up to 16 commercial licenses, 2-4 of which are reserved for applicants.