The sheetrock under a bust tube in Nick Conway’s attic falls due to the leak in Houston on Wednesday, February 17, 2021. Conway called his plumber but was told he was the 10th person on the line and he bought a repair tape to fix the pipe himself. 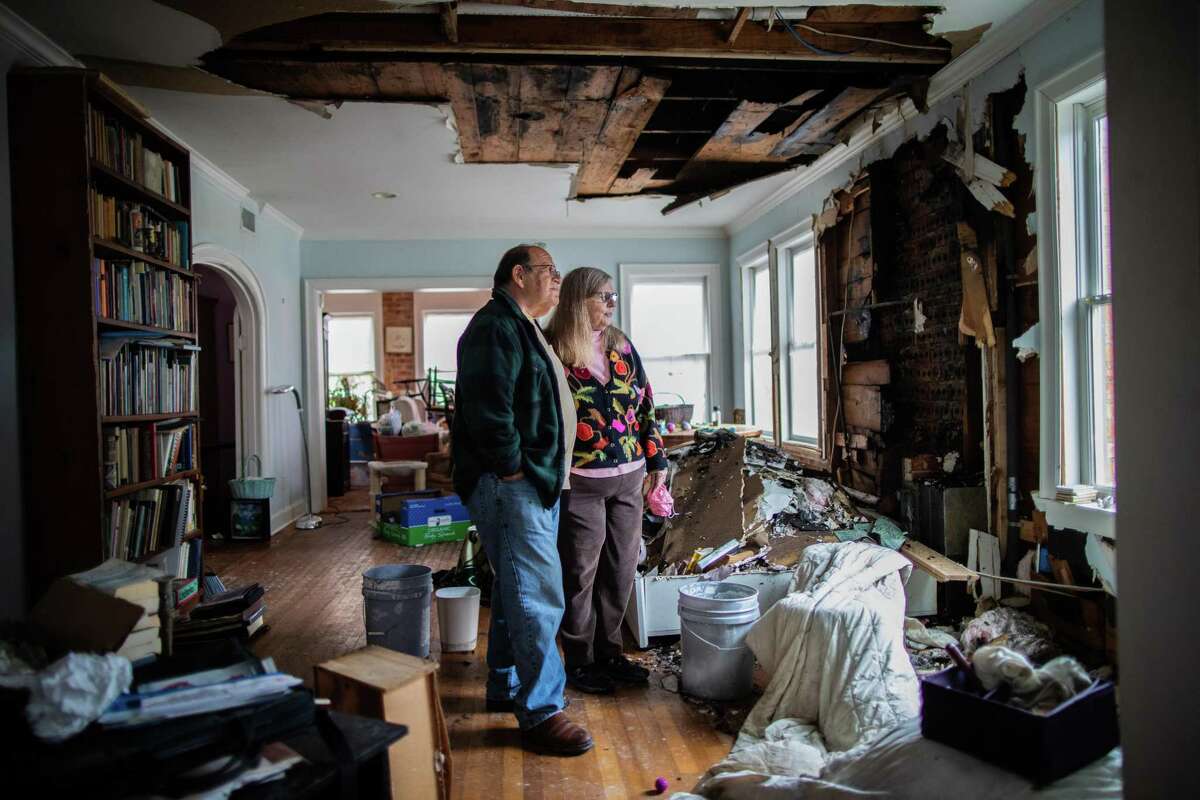 Judie and Martin Beller are standing in Houston on Thursday, February 25, 2021 in the middle of their destroyed living room. The couple tried to stay as warm as possible as temperatures plummeted into teens during winter storm Uri. They turned on their gas fireplace, which they hadn’t used, and soon their house was taken over by the fire.

Homeowners whose properties were damaged due to last week’s winter storm and freezing temperatures are eligible for temporary tax breaks, according to the Harris County Appraisal District.

“A change in state law since Hurricane Harvey now allows individual owners to apply for temporary disaster relief for physical damage to their property,” said Roland Altinger, the district’s chief appraiser, in a statement.

State tax legislation allows a property that suffers at least 15 percent damage in a disaster area declared by the governor to receive a temporary exemption from part of the estimated property value. Buildings and personal property used to generate income for a business are also eligible.

Governor Greg Abbott declared Harris County a disaster area on February 12th. Property owners have 105 days after such a declaration to apply for the exemption. The deadline ends on May 28th. The application can be accessed online at hcad.org.

Last week’s winter storm and blackouts caused billions in damage, according to economists’ estimates, rivaling the destruction caused by Hurricane Harvey in 2017, killing dozens of people in the Houston area alone.

Zach Despart covers Harris County for the Chronicle, including Commissioners Court and Flood Control. He came to Houston from Burlington Free Press, Vermont, and was also the editor-in-chief of the Houston Press. In 2017 he won the Association of Alternative Newsmedia’s Best Feature Award for his contribution to Venezuela’s corruption in Houston and Miami. He is from New York and is a graduate of the University of Vermont. Follow him on Twitter or send an email to zach.despart@chron.com.