As my Cato colleague Chris Edwards and I recently documented here, COVID-19 has accelerated the longer-term migration of many Americans from expensive cities like New York and San Francisco to places with lower taxes and lower costs of living. Bloomberg’s Misyrlena Egkolfopoulou examines changes to LinkedIn member zip codes and various cost of living metrics, and today provides more evidence of the “expensive exodus”:

Egkolfopoulou cites this and other data as well as various anecdotes and comes to the conclusion that the cost of living – especially housing costs – play an “important role” in the decisions of the moving company:

[S]some of the most expensive urban areas [are] recorded the greatest loss of population compared to previous years. Outbound moves in the Bay Area increased 8% in May and September compared to the same period in 2019, while Seattle and New York both saw 7% increases. Meanwhile, Jacksonville, Raleigh, Charlotte, Nashville and Phoenix were among the cities with the most inbound movements, according to data from Webster Pacific and United Van Lines. 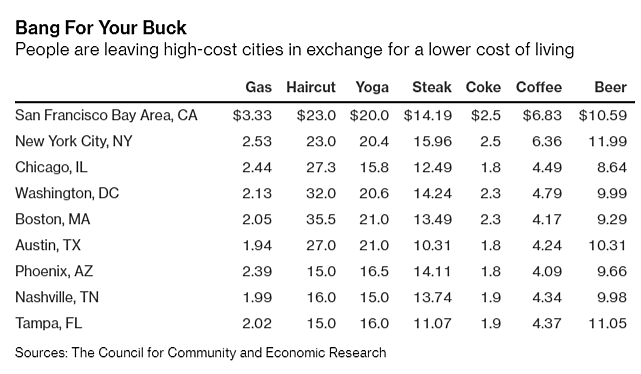 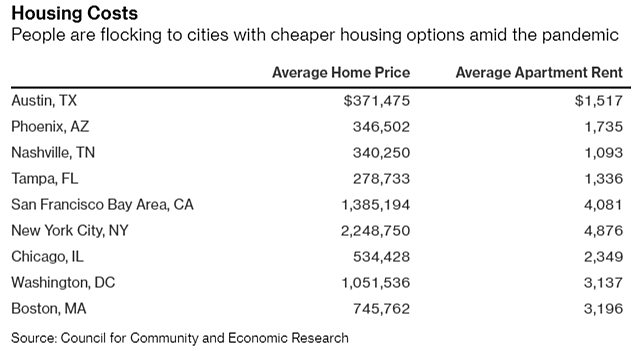 She adds that tax policy is another major driver:

… Covid-19 accelerates a decision made by numerous others before the pandemic. While the cost of living, lifestyle, house prices, and jobs affect removals, the cities that attract most people are in states with lower or zero local income tax rates. 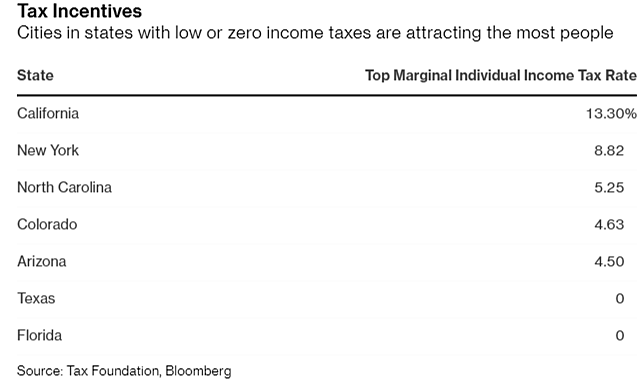 As Edwards and I noted, these migration trends were before COVID-19, but they were amplified for wealthier Americans who were more likely to work from home during the pandemic and have the ability to change addresses relatively quickly. While some of them have hailed departures from expensive “superstar” cities, Richard Florida of the University of Toronto warns that this trend could have serious implications for local households: it is estimated that 17% of residents who live in Earn dollars a year. If only 5% of these people choose to move, it would cost the city nearly a billion ($ 933 million) in lost tax revenue. “He remains optimistic about the long-term prospects of the superstar cities, but warns that if the policies of these places don’t change, their budgets will suffer in the meantime, and that their least fortunate people and neighborhoods will bear the brunt of it as budget cuts and austerity measures will eliminate important services. “Since Florida traces much of the current exodus to the 2017 Federal Tax Act’s restrictions on state and local tax deductions (SALT) that once gave high-tax cities a chance to battle their lower-tax rivals,” he suggests urban and local taxes State governments are developing “new revenue models that take into account the location of people and their businesses” in order to counteract the “effects of new remote technologies on state and local taxes”.

However, this approach seems to ignore the many non-tax reasons why wealthier Americans – who are now unencumbered by a physical office – leave more expensive places (though the SALT deduction likely actually plays a role). Most notable in this regard is housing: in addition to the above data on home prices, for example, the St. Louis Fed’s RPP (Regional Price Parity) indices, which economists use to compare the cost of living in metropolitan areas, show the rent differences between the outskirts migration states and immigration states are in most cases quite significant: 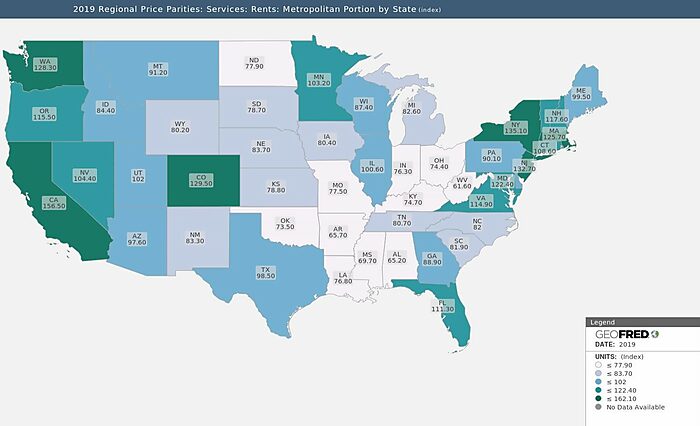 A novel “revenue” solution also removes the far simpler policy approach expensive states and cities might take: attacking costs directly through less criminal taxes (both on income and goods), less regulation (especially on housing), better governance and more personal freedom. As Edwards notes in his 2018 paper, such measures could not only discourage current residents from leaving, but also attract new people and investment.

These places cannot change their weather, but they can certainly improve their economic climate.