More than 1,100 Nassau County residents who own new homes or houses that have had major renovations are receiving what they say are shockingly high property tax bills that in many cases are thousands of dollars more than they had expected.

County officials say the big bills are an unintended consequence of Nassau County’s first countywide reassessment in a decade. In 2018, Nassau County Executive Laura Curran set out to establish new home values for all residential properties, after the tax roll largely had been frozen for nearly a decade and many properties were undervalued.

A bill passed by the Nassau County Legislature last year seeks to limit big immediate tax hikes because of reassessment. The law allows owners of most of the 385,000-plus residential properties in Nassau to phase-in tax hikes, or decreases, over a five-year period.

But county officials say new homes, or those with extensive new construction can’t get the exemption because they’re essentially being assessed for the first time.

Owners of such properties must pay taxes based on their full valuation right away. They argue that forces them to shoulder an unfair share of the overall tax burden until assessments for most other properties catch up over the five-year phase-in period.

“No one is going to buy this home for 30 grand in taxes.”

Sandra Stine, 40, a school psychologist from Wantagh, expanded the first and second levels as part of a major renovation, where she lives with her husband, three children and Stine’s adult sister who is disabled. The home’s square footage more than doubled from 1,600 to 3,400.

After she got the tax bill last fall, Stine recalled thinking: “We just redid this home to take care of my disabled sister, my three kids. We have to move.”

But “then I was like, no one is going to buy this home for 30 grand in taxes,” she said.

“I didn’t realize I was going to have to make up for everyone else’s exemption,” said Stine, who had to ask family for help making the first-half school property tax payment by December.

“If you don’t have the exemption, which is very widely being applied to other residential property, then you’re going to feel that tax burden shift.”

“To the extent that anyone receives an exemption for any purpose, it results in a shift in tax burden, to other property owners who don’t receive that exemption,” Conal Denion, special counsel for Nassau County, said of the five-year phase-in.

“If you don’t have the exemption, which is very widely being applied to other residential property, then you’re going to feel that tax burden shift,” Denion said.

“The idea is it’s a new assessment, as opposed to existing property that had been reassessed,” Denion explained.

“If it’s new construction … that portion of the value didn’t exist before,” Denion said.

“It’s not being reassessed — it’s being assessed for the first time,” Denion said. “So the law is designed to address changes [due to reassessment] … and this property that’s new doesn’t have any changes. It’s all new, there’s nothing to transition from.”

Developers and county officials say tax bills on new construction will come down when other properties are assessed at full value after reassessment phase-ins end.

“After five years, everyone who’s entitled to the five year exemption would be rolling off, and the people who had new construction who weren’t being phased-in would be obviously impacted less,” Denion said

The lack of an exemption for new construction affects homeowners countywide. They include individuals who built new homes, or significantly remodeled old ones, and seniors who bought into new residential complexes after selling single-family homes on Long Island where they’d lived for decades.

Two categories of homes are affected, according to Nassau’s Assessment Department:

At Country Pointe in Plainview, a new development for residents aged 55 and above, many residents have annual tax bills of nearly $40,000, according to county assessment records.

Developers had projected annual property tax bills of $15,000 to $23,000 for most units, with total taxes of up to nearly $30,000 for some higher end units, according to offering plans filed with the state Attorney General.

At the new Roslyn Landing a condominium complex in Roslyn Village, a 78-unit luxury development on 12 acres, some homeowners have received tax bills of between $40,000 and nearly $50,000, county assessment records show.

Property owners began moving into the development, a major mixed-use project that will have 750 housing units when built out, in 2018.

Some residents who said they had lived in Plainview or Old Bethpage for decades, said after reading the prospectus they had expected annual tax bills of about $20,000, about what they said they paid for their old homes. 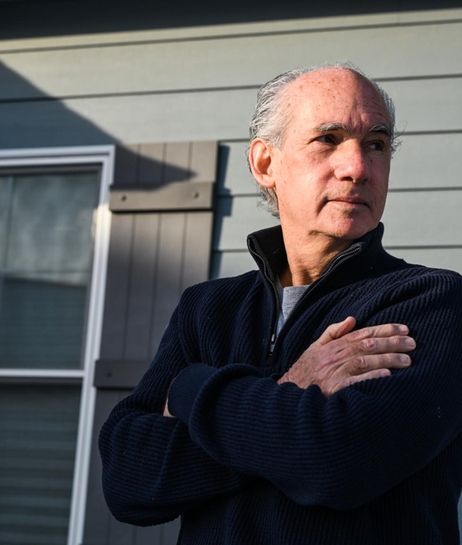 Moved in June 2018 after living in Old Bethpage with his wife, a retired middle school reading specialist, for 39 years.

Gary Epstein, 68, moved into the development in June 2018 after owning a home in Old Bethpage with his wife, a retired middle school reading specialist, for 39 years.

The couple own a 2 bedroom, 1,656 square foot apartment with an unfinished basement and outside patio.

“People are actually getting sick over the fact, getting anxiety attacks over the fact that people are having to come up with tax bills that are $15,000 more than they expected to pay,” said Epstein, a certified public accountant.

“We’ll probably meet at a fair level, but for the next five years we’re going to be paying at exorbitant levels based upon us having to compensate for someone else’s home who is getting a 5-year phase-in,” Epstein said. 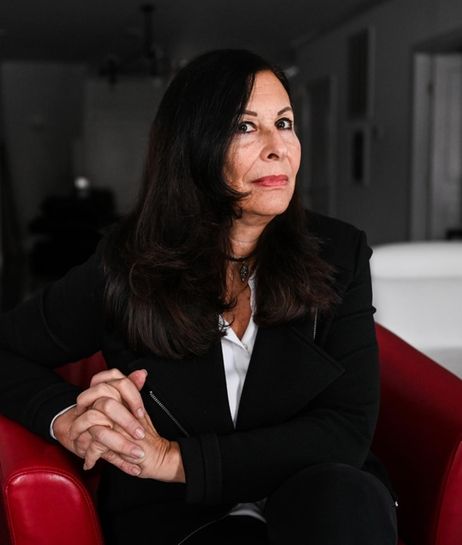 Moved into 1,700 square foot apartment in June 2018 after selling her home in Plainview, where she and her late husband had raised her two children, now grown.

Marla Passaro, 62, a bookkeeper, also moved into her 1,700 square foot apartment in 2018. The unit has two bedrooms and two baths along with a basement.

Property taxes on her old 3,400 square foot home in Plainview, where Passaro and her late husband, Joe, had raised two children, are about $23,000 this year, according to county records. The home is valued at $845,000.

“Needless to say my mouth dropped,” Passaro, a widow, recalled of the day her tax bill arrived last October. “I was embarrassed, I was keeping it a secret. My first reaction was, … I probably can’t sell with the taxes this high.”

She continued: “I went from 3,400 to 1,700 square footage to stay in the community that I know and love, where I’m comfortable, and they’re pushing me out because they’re doubling the taxes for half the space.”

“We’re shooting ourselves in the foot, with respect to senior citizens or people who are retiring.”

Like many residents of the development, Drucker’s taxes in his first year in the home, before it was fully assessed, were nominal — about $715.

But Drucker, who helped state lawmakers draft legislation aimed at delaying big taxes on new construction in Nassau, said he expects a bill of $37,000 to $38,000 next year.

“What we’re doing is we’re shooting ourselves in the foot, with respect to senior citizens or people who are retiring,” and want to stay on Long Island, said Drucker, 64.

“You’re going to pay high taxes, what’s the point, you might as well go somewhere else,” Drucker said.

“We have enough confidence that the elected officials will solve this problem that we have made the representation, or are willing to make the representation to future buyers that if God forbid it’s not corrected, we will pay the overage,” Dubb said.

“But we consider that the equivalent of giving away snow in the winter, because we’re confident it’ll be corrected,” he said.

In a statement, Dubb said Country Pointe, “residents who have paid for these unintended consequences by the County should be able to grieve their overpayments in a way similar to the existing process.”

Patrick Silberstein, 75, and his wife Lynda, who had lived in Kings Point for 40 years, moved into their townhome in Roslyn Landing in Roslyn Village four years ago. Their $1.75 million condominium has three bedrooms and 2.5 bathrooms, county records show.

“Low and behold it turned out it was probably not the right move because the taxes we are paying are confiscatory,” said Patrick Silberstein, owner of the landmark Thomaston Building in Great Neck Plaza, which has office space, a restaurant and a jewelry store. 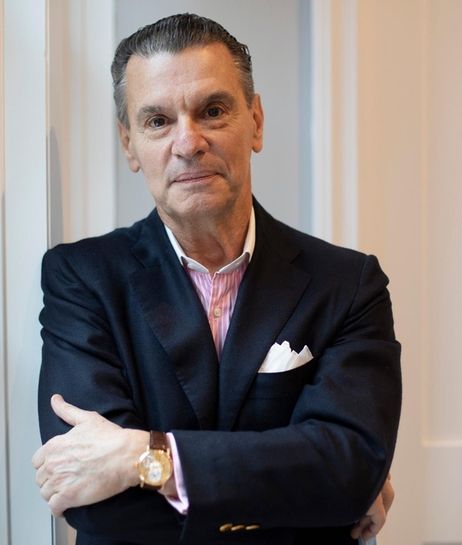 “We thought they would be $40,000, which would have been very expensive,” but manageable, Patrick Silberstein said of the Roslyn Landing unit.

“I was absolutely flabbergasted by the amount of taxes we are paying, because had we known that we would not have bought in Roslyn,” he said.

Jing Sun, 46, an associate real estate broker with Douglas Elliman, moved to Roslyn Landing in November 2017, two months before Curran, a Democrat, took office and about a year before she introduced the phase-in plan. 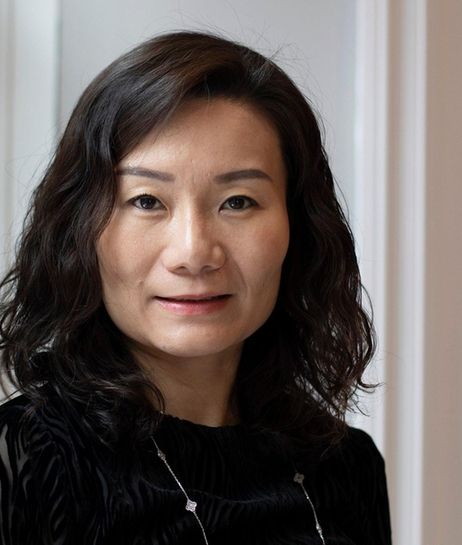 Moved in November 2017 with her husband and daughter after living 100 feet away in Roslyn. The family live in an “English style, flat over flat,” with two floors, 2 bedrooms, an office and three bathrooms.

Sun lives there with her husband, a chief executive of an international garment import company, and their 8-year-old daughter.

The family, who moved from a home close by in the village, have a 3,000 square foot, “English style, flat over flat,” with two floors, 2 bedrooms, an office and three baths.

Representatives for the builder, The Ranches, and G4 Capital Partners, which helped finance the project, did not immediately return calls for comment.

Sun said she and other residents she has spoken with feel trapped — unable to sell their units because of the high taxes, and unable to afford the big tax bills if they stay.

“Everybody has their budget of their life, no matter if they’re affluent, they’re poor,” Sun said.

If residents sell their units, “they’re going to lose the money,” Sun said. “It’s not an easy move for people who spent more than $1.5 million for their house. But if they don’t move, the tax is like slaughtering their life, making people sweat.”

Under the measure, which Curran backs, homeowners would be allowed to phase-in $750,000 in new construction costs, including those associated with entirely new homes, over an eight-year period. The current state phase-in limit of $80,000 only applies to increased market value.

According to the legislation, the changes would be effective for Nassau’s 2020-2021 assessment roll, along with the 2021-22 roll and next year’s 2022-23 roll. The legislation then would sunset, and current state law, including the $80,000 exemption for market value increases, would be restored.

A similar measure that Thomas and Lavine sponsored last year failed to get out of legislative committees in the state Senate and Assembly.

Thomas, who said he’s received some 100 letters about the issue, said, “this year we’re pushing even harder; we needed to explain the bill better. I’m fighting for a solution to this, and we’re going to get there sooner or later.”

The issue also is in the courts.

In October, state Supreme Court Justice James P. McCormack threw out a lawsuit that called the phase-in unconstitutional, in part because the law treats different categories of property differently.

In his ruling, McCormack said Nassau County was allowed to treat properties considered “new construction” differently than others.

“The court finds that all properties are being taxed at [full market value] but some are entitled to an exemption that others are not,” McCormack wrote.

Plaintiff Sean McCarthy, of Massapequa, says he is appealing.

Scott Eidler covers Nassau County government and politics for Newsday. Scott has worked at Newsday since 2012 and previously covered municipal government and education.