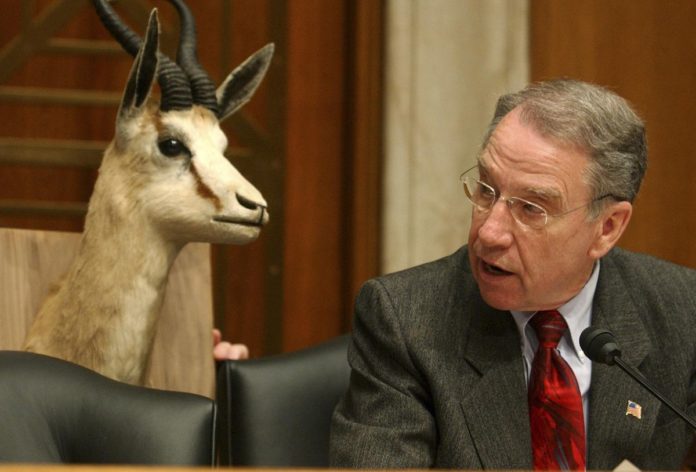 The Biden government has submitted its infrastructure proposals and is now seeking support from both parties. One area that is supported by both parties (and needs urgent reform) is tax incentives for charity. Reforming tax incentives for charitable donations has two benefits: putting nonprofit dollars into the hands of charities that raise the needy; and at a low cost to taxpayers.

Put charitable dollars in the hands of charities

One of the most itchy realities of giving to charity today is that three of the largest charities in this country are Fidelity, Schwab, and Vanguard. The charitable organizations of these financial institutions, which are sponsored by the Donor Advised Fund (DAF), receive billions in contributions from their wealthy clients (with clients benefiting immediately from a tax deduction for a charitable contribution). The vast majority of the charitable money in DAFs – over $ 140 billion – is only stored by the financial institutions, which earn huge fees for managing the money. (Each year they store about 85% of the funds available for charity).

Also, unlike private foundations, there is no need for the money in a DAF to go to an actual working charity (such as the Salvation Army or a food bank) to help those in need. The money can sit – forever. Worse still, the current rules for DAFs allow private foundations to bypass their payout rules as they can meet their payout rules by giving DAFs where they can sit and do nothing (yikes!). You can find more about this absurd politics – and solutions – here and especially the top tax law professors Roger Colinvaux and Ray Madoff here.

Fortunately, an important new organization has been formed – the Accelerated Donation to Charity Initiative (IACG), backed by a number of leading voices in the nonprofit sector, calling on Congress and the Biden government to make reforms for DAFs with common sense private Foundations and the Non-Itemizer Deduction.

For DAFs, the IACG reforms would require the tax deduction to be made available for donations to be distributed to a nonprofit organization within 15 years. To avoid overvaluation (a big problem in this area – and an important way for the wealthy to lower their tax burden), the income tax deduction for tightly held or restricted stocks would be the amount of cash made available through DAF accounts the actual sales. Brilliant. No more quick and loose valuation games – the value of an item is what it was sold for in a transaction on market terms between a willing buyer and a willing seller. Who knew? This is an obvious loophole for the government, which is trying to close the tax gap and ensure the rich pay their fair share.

The IACF’s proposed 15 year payout rule is a friendly alternative to the proposed 5% per annum payout for DAFs (similar to private foundations) suggested by my old boss Senator Grassley (R-IA), as well as suggestions from Chair of Ways and Means Committee Camp (R-MI) (a 15 year payout rule required) and Brady (R-TX) (payout reporting required and encouraging DAFs to implement payout best practices). In particular, see Grassley’s proposals in S 2020, introduced in 2005 – Section 331, which require a 5% payout per account and even stricter anti-abuse rules for closely held stocks. Most importantly, the IACG proposal will ensure that the billions of dollars currently gathering dust in DAFs go to charities that help the poor and improve our communities.

We have a charity tax incentive that has helped raise more than $ 140 billion to charity – but not going to charity. Without reform, DAFs are essentially an incredibly expensive, taxpayer-subsidized employment program for money managers on Wall Street. Congress must ensure that this charitable tax incentive encourages the donation to go to work and help those in need.

Reforms of the private foundation

The IACG is also proposing common sense reforms for private foundations. Suggestions include: Private foundations cannot meet their 5% payout obligation by paying salaries or travel expenses for family members of the foundation (or making circular donations to funds recommended by donors). For anyone unfamiliar with the abuses of private foundations, too often officials and directors see the private foundation they control as little more than a private piggy bank to pay high salaries and travel to exotic locations for annual board meetings , Congress must ensure that nonprofit dollars are used for charity – not family benefits. Perks and lavish trips. In addition, the IACG reforms will encourage private foundations to pay out more than 5% by abolishing the excise tax on private foundations with a payout of more than 7%. Carrots for good behavior – get dollars out the door.

Implementing these reforms – could likely raise money due to their fraud protection and, more importantly, have a huge impact on putting billions of nonprofit dollars into work – buying blankets; meals; and protection for those most in need in our country.

While sensible IACG reforms have benefited from considerable bipartisan support, I am most encouraged that two of the leaders in the nonprofit sector collectively, Craig Kennedy and William Shambra (and certainly two of the most respected and knowledgeable voices for conservative charities) are) have written in favor of IACG reforms.

Congress – Building on the Grassley Reforms

It is important for Republicans to remember that while charity reform is bipartisan, the recent push for charity reform began with the efforts of Chairman Grassley (R-IA) on the Senate Finance Committee (and later by the Chairman Camp and Brady was expanded). I was a tax advisor to Grassley on the Finance Committee from 2001 to 2008, and as part of Grassley’s oversight role, we were directed by Grassley to take our first hard look at the nonprofit sector in years. What we found was while there was much good – there was also much that blinked.

The problems Senator Grassley’s exposure uncovered included a number of: nonprofit hospitals, overwhelming the poor and burdening them with debt collection; Colleges with massive foundations that did little to nothing to control runaway tuition fees; and quick and easy maintenance measures and facade reliefs that gave the rich great tax breaks and brought little to no benefit to the community. Other areas in which we found abuse were: activation of corporate tax homes; Car donations that were grossly inflated (and at best resulted in only pennies going to charities); and even stuffed animals that have been donated to museums (with the taxpayer deducting the entire cost of the safari).

Chairman Grassley has been able, on a bipartisan basis (particularly with the good support of Senator Baucus (D-MT), the senior finance committee member at the time), to undertake a number of important charity and charity reforms, one of which has great benefits have benefited taxpayers and strengthened the non-profit sector. While these Grassley reforms included some efforts to curb abuse of DAFs, it is clear that further reforms need to be implemented. As Senator Grassley noted in a December 6, 2011 press release – the 2006 reforms only put a brake on the “most blatantly abusive transactions” – and that more work needed to be done – particularly in the area of ​​DAFs, which he rightly called “pet tax breaks.” “Marked for millionaires”

The size of DAFs has grown exponentially since the first Grassley reforms were enacted into law a few years ago. In particular, one area that was considered small and isolated (although it has great potential for abuse) – donating stocks and similar non-marketable items to DAFs – has grown by leaps and bounds. DAFs are transforming the desire of private philanthropy conservatives into a tax break program for money managers. The IACG reforms build closely on the nonprofit reforms first proposed by Chairman Grassley – and bring us back to the basic tenets that both sides of the aisle can agree on – that charitable giving should get into the hands of charities, who help the charities poor and our communities.

As the Biden government is working to bring together bipartisan support for its infrastructure bill, it would be an easy start to include the IACF’s nonprofit reforms as part of the package. The reforms will do a lot of good to those most in need.

Ken Morris: Put together now for the anticipated adjustments in tax...

Laws not pleasant to the unemployed Our view