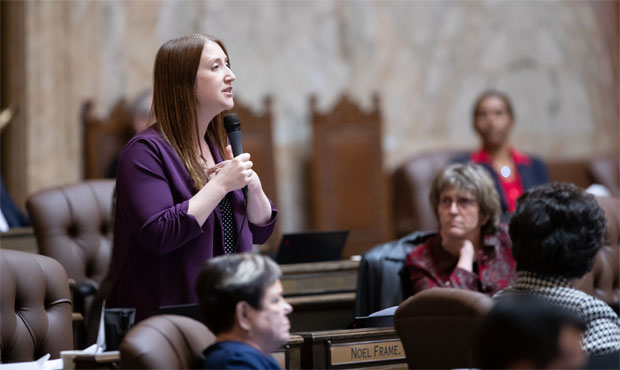 After the 7% capital gains tax was passed over the weekend, many wonder if this is a precursor to a Washington income tax. Rep. Noel Frame, who sponsored the newly approved capital gains tax bill, spoke to KIRO Radio’s Dori Monson Show to shed light on these concerns.

For Rep. Frame, she sees this as an opportunity to address government tax legislation that is often referred to as regressive and unjust.

“I think we’ve made gigantic strides for the working people in Washington State by finally starting to address our perverse and regressive tax laws that are too dependent on the working people,” she said. “We are very excited about some progress.”

But does this suggest a bigger goal that this should be the first step towards introducing an income tax in Washington state?

“Not necessarily,” remarked Frame, pointing out other ways the state could reform its tax laws. “… When I say it’s just the beginning, we’re rethinking and hoping to restructure all of the state’s tax legislation and address the other parts that are also dependent on working families a little too much.”

This includes a wealth tax framework proposed at this meeting, which she sold as an “alternative idea” to a full state income tax. The ultimate goal, she says, is to ensure that other taxes that disproportionately affect working class Washingtoners can be lowered without costing the state significant revenue.

“We are trying to reform and restructure tax legislation, and in a revenue-neutral way,” she said. “If we want to cut property tax or replace the B&O tax with something else, we need revenue to replace the revenue that is lost as a result.”

Listen to the Dori Monson Show on weekday afternoons from 12pm to 3pm on KIRO Radio, 97.3 FM. Subscribe to the podcast here.