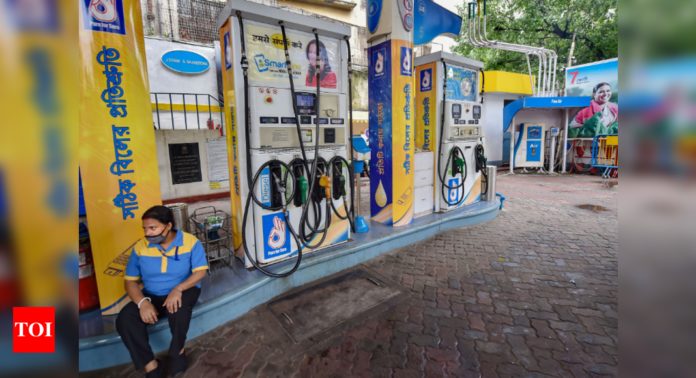 NEW DELHI: The government will try to lower gasoline and diesel prices in due course through tax cuts, the head of the agency responsible for excise duties and other indirect tax collection announced on Tuesday.
The record excise tax on gasoline and diesel contributed to indirect tax revenues increasing by more than 59 percent in the fiscal year ended March 31 (2020-21) compared to the previous year.
“We are very confident that the revenue will be very high in the coming months,” said CBIC chairman M Ajit Kumar during a video call with journalists to reveal the tax collection numbers.
“As for the reduction in fuel prices, this is under constant scrutiny and I am sure that an assessment will be made at this point,” he said.
He was asked if the government was considering cutting excise taxes on gasoline and diesel to ease the burden on consumers.
He didn’t go into timing, however.
Last year the government increased the excise tax on petrol by Rs 13 per liter and that on diesel by Rs 16. The excise tax on gasoline is now Rs 32.90 per liter, making up 36 percent of the retail price of Rs 90.56 per liter of fuel in Delhi.
The excise tax on diesel is Rs 31.80, which is 39 percent of the retail price of Rs 80.87.
Together with state sales tax, taxes make up 55 to 60 percent of the price consumers pay.
Gasoline prices topped 100 rupees in some locations in Rajasthan, Maharashtra and Madhya Pradesh in February as international oil spiked. However, as soon as elections were announced in five states, including West Bengal, Tamil Nadu and Kerala, prices were frozen.
And they fell a bit as international prices fell on concerns about a recovery in demand amid the resurgence of the Covid infection. Gasoline had hit an all-time high of 91.17 rupees per liter in Delhi in February, and diesel hit a record high of 81.47 rupees.
CBIC member (budget) Vivek Johri said a 59.2 percent growth in excise collections was due in part “to an increase in the tax rate.”
“If there is a cut that affects consumption tax revenue,” he said.
There has also been a decline in consumption as states partially imposed lockdowns to contain the spread of coronavirus infection.
“Because of Covid, you would have recently seen reports of a decline in the consumption of petroleum products, particularly diesel, petrol and other fuels. So the revenues depend on where prices are located, if at any change in rates and levels of consumption that we see in business, “he said.
Last month, Oil Minister Dharmendra Pradhan had told Parliament that the tax on gasoline and diesel in 2013 was 52,537 billion rupees, which rose to 2.13 billion rupees in 2019-20 and continued to 2.94 for the first eleven months Billion rupees increased for tax purposes in 2020-21.
The CBIC has not issued a separate consumption tax collection for gasoline and diesel for the 2020-21 financial year.