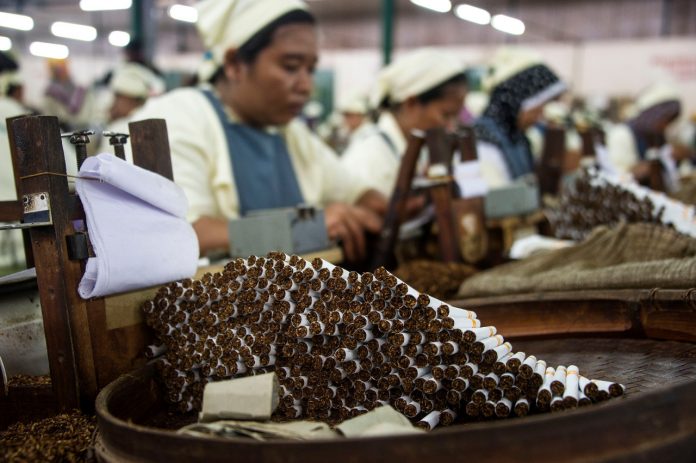 The government has decided to increase the excise tax on cigarettes by 12.5 percent (weighted average) for 2021. The excise duty on cigarettes is a policy the main objective of which is to reduce cigarette consumption, which certainly has an impact on industry and employment, as well as illegal cigarette production.

The debate over whether excise taxes should be applied is almost non-existent as everyone agrees on the importance of reducing cigarette consumption. One in three Indonesian adults smokes cigarettes based on the 2018 Indonesian Basic Health Survey. The prevalence rate among teenagers between the ages of 10 and 18 was also quite high at 9.1 percent.

The medium-term national development plan (RPJMN 2020-2024) states that the number should decrease if we are to improve the quality of human resources. In particular, the smoking prevalence among school-age children should be reduced to 8.7 percent by 2024. Therefore, the RPJMN provides that excise policy should be adjusted to meet the target.

Experience over the past few years shows that there is a negative relationship between cigarette prices and sales, which also increases the prevalence of smoking.

Due to excise tax policy, cigarette prices in addition to related taxes in Indonesia are now higher than the average in higher middle income countries around international dollars at purchasing power parity (PPP), although still much lower than in high income countries. In addition, the World Health Organization advocates an increase in excise taxes so that all tobacco taxes account for at least 70 percent of retail prices for tobacco products. All of this means that there is still room for an increase in excise duties on cigarettes in the future, lowering the prevalence rate.

On the production side, it’s pretty clear that overall cigarette sales will be negatively impacted. However, the effects vary depending on the type of cigarette. In 2020, machine-made white (pure tobacco) cigarettes, which dominate the market share, saw a steep drop of around 30.5 percent based on cigarette sales data as of October 31. Interestingly, sales of much cheaper hand-rolled cigarettes rose 14.7 percent.

On the other hand, the income of the cigarette industry has been stable due to the industry’s ability to moderate the rise in prices. The industry was dominated by seven large companies that accounted for 79 percent of the total market share (2019). Gudang Garam, for example, was able to increase its profit margin from 8.8 percent in 2016 to 9.8 percent in 2019.

The Kretek (clove and tobacco blend) cigarette industry employs 158,552 workers, while clove and tobacco growers employ 526,000 workers. The unit industry is also dominated by small Kretek cigarette manufacturers. In total there are around 480 small factories with a capacity of less than 500 million cigarettes per year. Indeed, it is important to examine how the excise duty has actually affected these vulnerable people.

Little did we know from a macroeconomic point of view that the impact of cigarette excise tax policy is not the main problem for the development of the tobacco industry. Despite the higher tax rate, local tobacco production rose steadily from 1980 to 2019 (data from the Ministry of Agriculture). Local tobacco demand even rose from 127,000 tons to 197,000 tons in 2019, meaning that the increase in excise tax rates had no impact throughout the period. Demand was even higher than local supply, which made imports necessary.

A study by the University of Indonesia (2020) in some tobacco producing areas such as Temanggung, Rembang and Magelang in Central Java, Pamekasan and Jember in East Java, and Lombok in West Nusa Tenggara found that there are challenges on the microside.

The 2021 excise policy addresses this issue by exempting the excise tax increase on hand-rolled cigarettes and a relatively lower tariff increase in 2019. The directive helps to reduce the impact on consumption. The 2021 excise tax policy also supports another fiscal tool to split the revenue for cigarette tax receipts.

According to Finance Minister Ordinance No. 7/2020, part of the excise tax revenue is transferred to the local authorities of the production areas and provided for specified activities such as social assistance for tobacco farmers and workers in cigarette factories as well as technical assistance and provision of capital for farmers and workers who become small business owners; and improve the input quality. The funds can also be used as financial aid for the affected tobacco growers and cigarette workers.

Fiscal policy aside, some real sector measures can be taken to address the supply side problem of the tobacco industry. The government can facilitate the partnership between cigarette manufacturers and tobacco growers to meet the needs of the industry and the products of farmers. In addition, the government can improve the tobacco trading system and support small tobacco farmers, who in most cases have a weak bargaining position with large cigarette companies.

All in all, we should admit that 2020 was a tough year for all industrial sectors in Indonesia. By increasing the tobacco excise tax by 12.5 percent, we estimate that this policy would further reduce cigarette sales by 2.2 percent. On the positive side, the smoking prevalence among adults would also decrease by 32.4 percent and among children by 8.9 percent.

The authors are analysts for the Fiscal Policy Agency of the Treasury. The views expressed are their own.