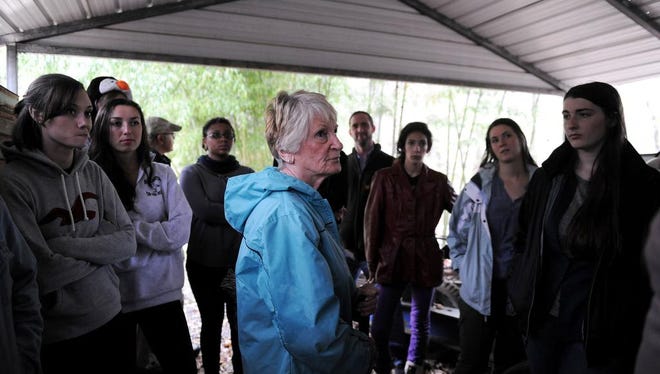 After years of litigation and technical cleanup at Asheville Inc.’s CTS Superfund Site on Mills Gap Road, the EPA is now waiting and verifying that it is working.

“Finally,” said Dot Rice, 84, who owns property that has been contaminated and that was part of the cleansing advocacy. “It’s been a struggle for years.”

Years of on-site manufacturing contaminated it with a solvent called trichlorethylene, or TCE, a degreaser and carcinogen, causing Rice and others to drink tainted water for nearly a decade.

But now, she says, she is doing better with the site than if the land were safe again.

“It was a long, tough fight, but I feel better now than ever,” said Rice. “It feels great, it really does.”

Several companies manufactured electronic components on the site from 1952 to 1986, and in 1987 Mills Gap Road Associates purchased the 53-acre area on the site and sold nearly 45 acres to the Biltmore Group in 1997.

During decades of manufacture, the TCE, a solvent and heating oil, littered the site, leading the EPA to declare it a superfund site and add it to their list of national priorities.

It is one of three Superfund locations in the Asheville area, adjacent to Blue Ridge Plating Company in Arden and Chemtronics Inc. in Swannanoa.

In 2016, the EPA signed an agreement with Northrup Grumman and CTS, who previously worked on the site, and property owner Mills Gap Road Associates, that the companies would have to spend $ 9 million to remove 95% of the contamination.

With that began work, which began in earnest in 2017 with an electrical resistance heater that heated the groundwater and evaporated the TCE to remove it.

The next phase, chemical in situ oxidation, was completed in March 2020, a series of injections of potassium permanganate into the soil to oxidize TCE and break it down into carbon dioxide and water.

According to the EPA, between December 2019 and March 2020, about 350,000 pounds of the chemical were injected through 76 injection wells 55 to 90 feet below the surface and it should take 3 to 5 years for the TCE in local groundwater to decrease by 95%.

If this isn’t achieved, more oxidation may be required, says the EPA.

Remediation project manager Craig Zeller said he was happy with the project so far, which used 9 million kilowatt hours of energy during the resistance warming phase.

The project has reached a cost of around $ 10 million, higher than the earlier estimate, as more electricity than planned is used for resistance heating and about 10% more volume than expected is treated.

“The news is pretty good,” said Zeller. “I’ve worked with Superfund sites for 30 years and I have to say that this is the most aggressive aquifer rehabilitation strategy I’ve ever implemented.”

Now the EPA will continue to monitor the site every six months to check the progress of the oxidation treatments, Zeller said, and if it doesn’t reach 95% in three to five years or isn’t progressing fast enough, they’ll go back in and treat you it on site.

In July 2020 it showed a 50% reduction in TCE from before each treatment and in the last test in January it was up to 60%.

That 50 percent reading caused a little joy, he said, and it’s good news that the rate is still falling. If they check back in July it would be great to see 70% or 85%.

“We like the way it goes,” said Zeller. “It is definitely going in the right direction.”

Groundwater moves slowly, only 10 to 100 feet per year, and so it will take some time for the potassium permanganate to disperse in the groundwater, come into contact with the TCE, and destroy it.

And they’ll know if it works based on steam readings taken on Rice’s property, which is half the height it was before and also going in the right direction, Zeller said, but still too high.

Rice said an acre of her property is still fenced in, which is the location of the steam test, which still shows about 12,000 micrograms per cubic meter of TCE, Zeller said.

When that number goes from a five-digit to a four-digit number, he said, “Then I know we did it.”

More:Fairview, Chemtronics land that has been preserved as wildlife habitat and climate resistance

Lee Ann Smith of Protecting Our Water and Environmental Resources, or POWER, has been committed to cleaning up the CTS site for more than a decade.

She said some good progress had been made but the group would continue to push for more and continued cleanup work on the site.

Smith is also a volunteer advisor at the Center for Health, Environment and Justice in Washington, DC, who managed to add the Superfund Polluters Pay bill to the 2021 federal infrastructure plan.

The Superfund Polluters Pay Restoration Act would shift the cost of cleaning Superfund sites from taxpayers to polluting industries through an excise tax, providing the EPA with ongoing funding that would not be granted annually.

The center has joined more than 200 other grassroots organizations calling on Biden to reintroduce the tax, Smith said.

“Another important point that polluters pay is that people have clean air and water, and that these companies don’t just poison and get away with communities,” she said. “The point is that everyone can count on clean air and water and that it is the companies who pay for it, not the taxpayers who are the victims.”

CTS was testing wells on private landowners’ properties without their knowledge, Rice said, but those landowners did not find out about the contamination until nine years later, in 1999, and were drinking spring water all the time.

She owns 12 acres there and is hoping to sell about 5 acres since her husband Terry Rice died last year.

Terry Rice had a brain tumor, Dot Rice said, as did her granddaughter, although they have never had a doctor diagnose the contamination on the site.

Over the past two decades that she and others in the community fought to clean up the site, she said the project went through about 10 managers, but Zeller has been compassionate and worked hard on it, she said.

When TCE rates hit that 95% reduction mark, it will mark the completion of the 2016 remedy agreement, Zeller said, but they still have some work to do, namely to write another remediation decision for the deep bedrock that “has to.” a lot of TCE in it. “

In 2013-2014, Buncombe County worked with the EPA to get most of the people near the 235 Mills Gap Road location on town water, Zeller said, but 15 people chose to stay on well water and an entire house filter system to use.

The water that flows to these 15 homes is tested annually and still has to have TCE at all, he said.

And while a decision has to be made with deep groundwater, remediation procedures in bedrock become ineffective and difficult.

“Before we go away and explain the success at CTS, we have to find a solution for that too,” said Zeller.

Derek Lacey reports on health, growth, and development for the Asheville Citizen Times. Reach him at DLacey@gannett.com or 828-417-4842 and find him on Twitter @DerekAVL.

KAM warns: New taxes jeopardize the purpose of “Made In Kenya”